We are still working and moving forward! In the midst of adjusting our near-term goals to serve our online distance learners during this time, we have not lost sight of our long-term vision of bringing a children’s museum to our downtown community in Beaver Falls. Over the past several months, we celebrate some tangible measures that have brought us a few steps closer to making that dream a reality. 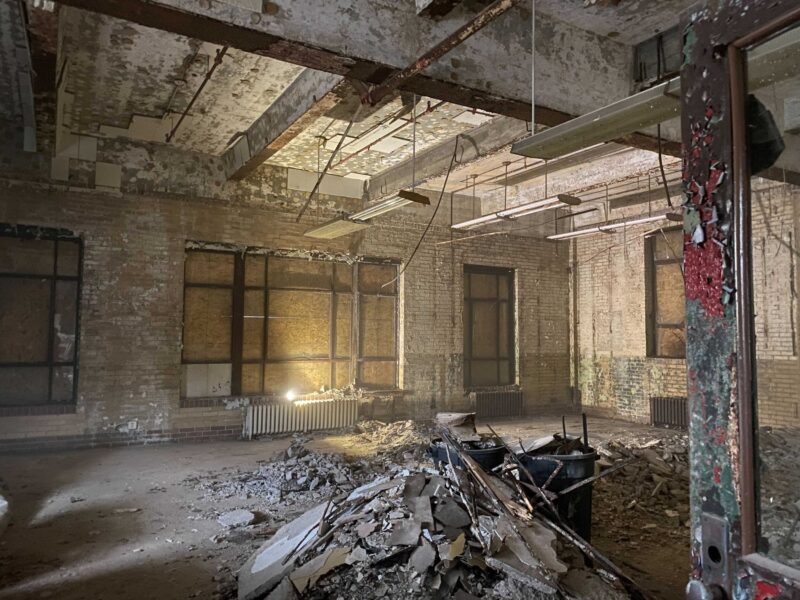 Neighborhood North has been working with the Beaver Falls CDC and a committee of people invested in the restoration of the iconic News Tribune Building, which is centrally located in the core business district of downtown Beaver Falls and contains decades of memories. The vision is to collectively work toward bringing the children’s museum project into that space. However, the Tribune Building has stood vacant for decades and needs both imagination and serious muscle to help reveal her amazing potential. Fortunately, that is exactly what several groups of volunteers brought our way this November!

On November 24, a group of over 20 folks from Nursing ABC/Portage Learning spent their Wednesday doing some incredible demo work, clearing out and removing unstable structures on the second and third floors of the Tribune Building. Brad Frey, Professor of Sociology at Geneva College and one of the folks vested in the Trib summed up the day in this way: “The building was a total disaster when [Portage Learning] got there and for the first time since we’ve owned it, it felt like the vision for it becoming a children’s museum took a huge step toward being a reality.

“On Saturday of that same week, 26 guys from Geneva’s men’s basketball team spent the morning taking piles of debris the Portage group had built and left (because we couldn’t get more dumpsters) and filled two more dumpsters. We could’ve filled more but they wouldn’t deliver anymore. A smaller group from Geneva’s Center for Student Engagement came that afternoon and continued to clean up and prepare more piles for future dumpsters.”

During a time when the world has seemed to stand still, it was such an encouragement to have folks step up and help this audacious project take a step forward!

OUR TEAM
OUR SPONSORS
OUR VALUES
Donate now!
Neighborhood North Museum of Play

Join us at the children's museum on September 20 between 6:00- 9:00 PM for this fun family event! There will be food, a 50/50 Raffle, Activities, and Special Guests!  Tickets are $20.00 and all proceeds go towards funding the play equipment!

Join us at the children's museum on September 20 between 6:00- 9:00 PM for this fun family event! There will be food, a 50/50 Raffle, Activities, and Special Guests!  Tickets are $20.00 and all proceeds go towards funding the play equipment!